Soviet military secret base - the biggest secret of Poland? 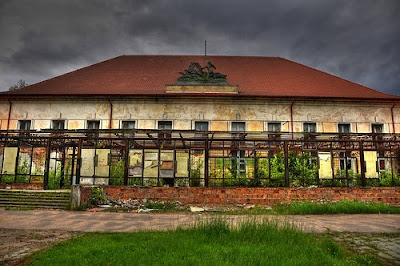 In the past only few knew what was special about this place in Poland.

In 90-ties of XX century they were abandoned in rush by Soviets and afterwards inhabited by Poles or fully disassembled.
There is one place still untouched and this post you will learn more about it.
In communist Poland for over 45 years there was few Soviet military bases located with nearly 100.000 Soviets with their families living there. This cities and villages were extraterritorial, which means that they were exempt from the local law.
Fully equipped for comfortable living including goods in the shops brought from Soviet Union.
One of these places is Borne Sulinowo located in Western Pomerania. When you walk around, it is possible to see really big buildings - how many people and with how big money it was all build here?
If you see this beautiful military guest house, don't think Soviet have built it - this building was built by Germans in 1936. It is not restored yet and still waiting for potential investor. In the past, before and during the World War II it was used by the army of general Heinz Wilhelm Guderian for trainings of high ranked officers.
Some of the places still keep the secret and nobody really have explored yet.
30 km away from Borne Sulinowo there is ghost village Kłomino. Before Soviets came here it used to be German panzer range and during WW2 prisoner camp where Germans kept their prisoners of war. After Soviets came here in 1945 they prisoned Germans in their own camp.
After the WW2 this place became part of Soviet military basy, with 7.000 inhabitants - today officially it has 11 inhabitants.
At the beginning of 90-ties Soviets left the place in big rush - like there was fire coming. They left literally everything behind. According to eyewitnesses who enter the place right after, there was wet laundry hanging and hot pots in the kitchens.
What scared them so much, that they left so fast, taking with them only most needed stuff? There is no answer to this question yet.
Near Kłomino there is Brzeźnica - a place in remote forest, far away from anywhere, protected with 3 tier fences. What was the reason for building here a very solid conrete road leading to large buildings with large gates?
There are still signs on the walls warning from possible nuclear radiation and large silo. Officially nobody confirmed that after WW2 there was SS-2 missiles in Poland, but what is that place then?
And why in 2005 Polish army had filled all underground with soil? What was there?
Other ex-Soviet bases with SS-20 missiles located in Poland during cold war: Templewo and Podborsko.
Before you get to Poland you may want to get a map Michelin Poland (Michelin Map) (Multilingual Edition)

Picture by Kamil Porembinski
Posted by Poland at 9:35 AM