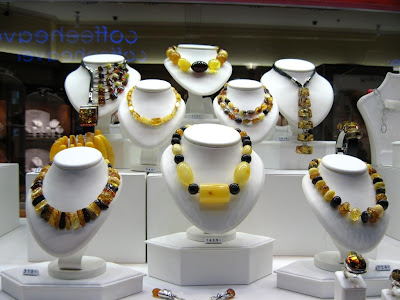 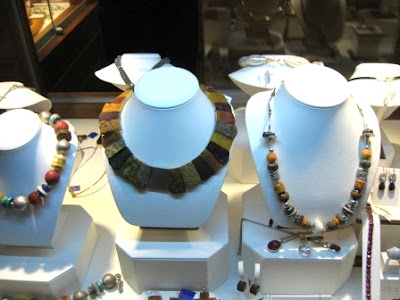 Dinosaurs have been more popular than ever since their starring role in the film Jurassic Park.
A more surprising result of the film's popularity has been a worldwide surge in demand for amber jewellery. Amber's popularity got peek after millions of people saw dinosaur DNA extracted from a mosquito trapped in amber in the film.
People learned that amber, which is fossilised pine tree resin, is ancient and valuable, like an antique from history.
Demand is especially strong for amber with insects inside it.
The two main sources of amber on the market today are the Baltic states and the Dominican Republic. Amber from the former is older, and thus preferred on the market.

Demand is especially strong for amber with insects inside it. Amber prices can range from $20 to $40,000 or more.
Luckily for new amber enthusiasts, amber from Poland is more widely available on the market than it was in previous years thanks to the liberalisation of the economies of Eastern Europe and the former Soviet Union.
Baltic amber is found in Lithuania, Latvia, Estonia, Poland, Russia, and occasionally washed up on the shores of the Baltic Sea as far away as Denmark, Norway, and England.
Other amber sources include Myanmar (formerly Burma), Lebanon, Sicily, Mexico, Romania, Germany, and Canada.
The desire for amber is nothing new. Amber artefacts dating back to the Stone Age have been found in what is now Germany and Denmark.
The Romans sent armies to conquer and control amber-producing areas. The Emperor Nero was a great connoisseur of amber. During his time, according to the Roman historian Pliny, the price of an amber figurine, no matter how small, exceeded the price of a healthy slave.
The ancient Germans burned amber as incense, so they called it 'bernstein', or 'burn stone'.
Certain orders of knights controlled the trade, and unauthorised possession of raw amber was illegal in most of Europe by the year 1400.
What secrets might amber hold?
Could a mosquito trapped in amber really contain dinosaur DNA? Most amber just isn't old enough, having had some 25 to 50 million birthdays at the most. The dinosaurs died out 65 million years ago at the end of the Cretaceous Period. The Jurassic period was 144 million years ago. But in 1994, Dr Raul Cano of California Polytechnic State University at San Luis Obispo, a molecular biologist, reported in the British journal 'Nature' that he and his colleagues had extracted DNA from a weevil that was trapped in amber 120 to 135 million years ago, when dinosaurs did indeed roam the earth.
Posted by Poland at 9:08 PM