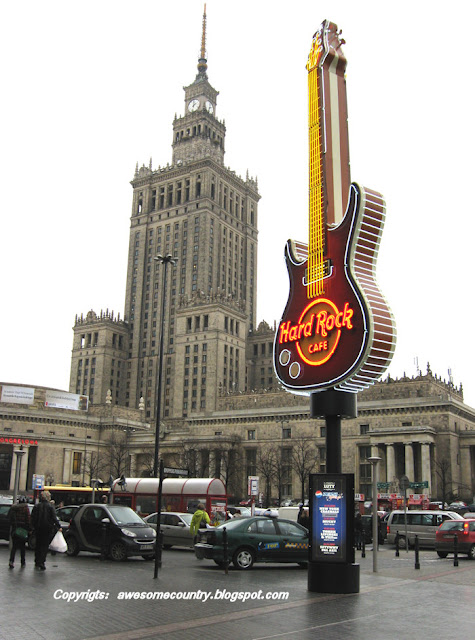 Yesterday I was rushing around the city, just trying to fix some things. I was looking around and I was thinking how bad it is, that after the war Warsaw was not restored properly. The main part of the center full of ruins of old apartment houses was not restored - there was a decision of removing them and place there a huge building Palace of Culture called 'Gift from Stalin'.
Josef Stalin was horror Soviet Union leader 1922-53. It was said he gave an option of either a metro system, or the palace. The people wanted a metro, so Stalin gave them the palace :( In 50-ties.
There is a concert hall, where are many performances taking place. The first band visiting Poland behind Iron Courtain was The Rolling Stones - I was kid at that time, but since then they had many fans in Poland. My mom was one of them :) so, when I was a kid I used to hear Rolling Stones as lullabys :)

Still today the center of the City is not arranged yet, because there are too many different ideas and there is no settlement. The ideas oscillate between removing Stalin's gift completely through leaving it and just hide with skyscrapers to expose it nicely as important historical monument.
I really do not understand why to remove it - whatever history is connected with it, it is still part of the past and history, right?

Walking around yesterday I just realise just another Laugh of the History - that huge guitar as big as the Palace of Culture. The first one you can find here.
Posted by Poland at 10:07 AM